OK, so one thing I’ve been doing during pandemic era is trying out hot sauces. Like a lot of hot sauces. Like a really unbearably large number of hot sauces. Like setting up hot sauce tastings where lunch is me making sad fish tacos out of my toddler’s abandoned day-old fish sticks but there are 15 different hot sauces to try with it. Like, when I got the new dream job, I was like, “I need to celebrate!” and… immediately went to an online hot sauce store and bought ten new hot sauces. This is apparently how I pandemic when I’m cut off from exploring restaurants and stuff.

STAGE 1: “Boy, these boutique/craft hot sauces are really incredible and complex and full of complicated flavor notes! Not like my old hot sauces!”

STAGE 2: “Boutique hot sauces are mostly a scam. They’re built to taste really good in the store or a tasting competition, on their own, but they totally overwhelm most food. Too much broadband complexity. A lot of the thinner, more traditional hot sauces actually work better to complement a dish without overwhelming it.”

STAGE 3: “Holy shit, overwhelmingly complex boutique-y hot sauces are great to have when half your meals are, like, Annie’s Mac and Cheeses that you’re splitting with your toddler.”

OK, here are my current favorites, after having gone through *a lot* of bottles recently. Sorted from least-spicy to most-spicy, and also vaguely by use-category. 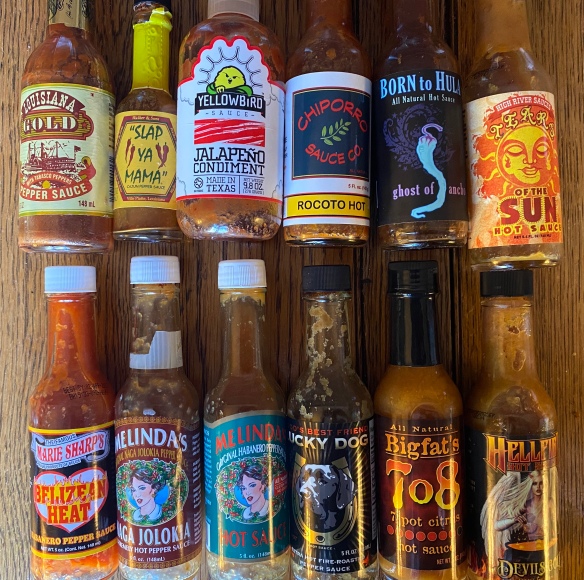 The precise vinegar-clean of Tabasco is still one of the most useful and flexible hot sauces. Louisiana Gold and Slap Ya Mama are both old-school Louisiana hot sauces that provide the same balance, but with way fuller flavor. Louisiana Gold is more exactly like Tabasco plus and I use it all the damn time. Slap Ya Mama is balanced away from the vinegar, but towards hitting you with the rich and particular flavor of fermented pepper.

This is with rocoto peppers, which I haven’t dealt with a lot. Where a lot of the habanero-school sauces have this sharp, scalpel hit, the rocoto gives is a much more broad, rich, low, umami-warming hug, but with a nice bite. I love this. This is one of the newer hot sauces that has completely captured my heart. Works with so much stuff. It doesn’t taste exactly like Tapatio, but it works in the kind of contexts Tapatio does. In the running for Best Sauce Ever.

CHIPOTLE-ISH: Born to Hula Ghost of Ancho
This isn’t a chipotle sauce, but it does what I wish a lot of chipotle sauces did. It’s got that low, toasty, toasty bass-note rumble. Goes with a lot of stuf

TROPICALIA: High River Sauces Tears of the Sun
This is one of those craft-sweet-tropical fruit sauces, with mango and papaya and some habanero. The whole category of sweet-tropical sauces doesn’t work in 90% of applications, but once in a while you find something it absolutely just lights up. This is basically a sweet sauce, with the heat providing just a bit of backbone and balance. It’s power-ketchup.

HABANERO: Marie Sharp’s Belizean Heat
If I could have only one hot sauce, probably the most flexible and usable is Marie Sharp’s – either the Original hot sauce, or the slightly sharper and punchier Belizean Heat. These are in the classic Carribean carrot-and-habanero style. They are at the center of what I mean by “lean, traditional sauces”. The kind you’re more likely to find in a ethnic-y grocery store, and not on some gourmet magazine’s recommendation list. The flavor is precise and narrow, instead of multilayered and complicated. It will never win any kind of hot sauce competition, or impress you in when you taste it, by itself. But it just punches up so many dishes, without interfering. It’s been around forever. And it’s cheap. (PS Marie Sharp’s has pretty much replaced Aardvark’s in my heart.)

FUNKY GHOST: Melinda’s Naga Jolokia
Classic hot sauce, made with bhut jolokia a.k.a. ghost pepper. A lot of ghost pepper sauces have this, like, very bro-styling, where the whole point is to exaggerate the intense knife-burn of the thing. This starts to make every sauce, and every use of the sauce, taste the same. (Kinda like the Great Hop Wars of the Mega IPA Beer era.) Anyway, Melinda’s NJ is instead about the peculiar funky vegetal flavors of the ghost peppers, fermented into extra-richness. Reminds me of certain Vietnamese fish pastes, in their funky splendor. But very hot. Also fantastic: Melinda’s Hot Sauce, which is also a slightly denser-funkier take on the carrot-habanero style.

KING OF THE KITCHEN SINK CRAFT: Lucky Dog Black Label
This is my favorite in a certain modern craft style: loaded with ingredients, super-intense, obvious complexity. Lots of roasted garlic in ones. Definitely one where you imagine YouTube hot sauce reviewers screaming MASSIVE FLAVOR BOMB at the camera or something. It will destroy the natural flavors of any dish – total tidal wave. On the other hand, for like Annie’s Mac and Cheese or tired tired leftovers, sometimes what I want is the tidal wave. This is a really, really good tidal wave.

MY FAVORITE SAUCE: Bigfat 708
Really. I think this is my favorite sauce. It’s brutally hot and super-rich, and also a little bit sweet, in lovely singing balance. It’s halfway between the “traditional lean” and “craft rich” categories. And it’s just… amazing. Like, something this full-tasting shouldn’t work with as many things as it does. But it somehow merges with almost everything. It uses Trinidad 7 pot chiles, which I have had no experience before this, but now believe is like habanero but with magical pixie dust sprinkeld over it. (A runner-up in the ultra-hot-but-tasty category is Hellfire Devil’s Own, a searing pineapple-habanero sauce.)

IF I COULD HAVE ONLY FIVE HOT SAUCES: